Hike offers a pilgrimage to the dawn of life

Hike offers a pilgrimage to the dawn of life 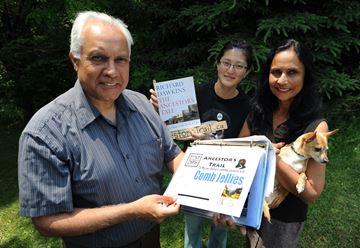 Mississauga veterinarian Kevin Saldanha will lead an Ancestor’s Trail hike, tracing one billion years of evolution, along the Culham Trail on Sunday. The walk is based on The Ancestor’s Tale by famed British evolutionist Richard Dawkins. From left, Saldanha,volunteer Teresa Tang, and his wife, Lisette, with pooch Pingu.

Instead of pilgrims journeying to Canterbury, Dawkins’ protagonists are living species — humans included — travelling back through evolutionary time to their point of origin.

The book, which was nominated for the 2005 Aventis Prize for Science Books, inspired a series of Ancestor’s Trail hikes in the author’s native England.

But you don’t have to flit across the pond to participate in one. Here in Mississauga, it’s replicated by Kevin Saldanha, who, when he read The Ancestor’s Tale, got the idea to recreate that march through time along the Culham Trail.

Although the hike, as described in the book, was originally conceived as a walk back in time, Saldanha decided (for logistical reasons) to plot the hike starting with the dawn of multicellular life approximately one billion years ago and ending with modern man.

The 12.5-kilometre trek starts from Erindale Park and, roughly following the banks of the Credit River, ends with a barbecue lunch at Pinecliff Dr. Park in Streetsville. For a less taxing outing, participants can also join the hike at various points along the route. Go to http://www.ancestorstrail.ca/ for rendezvous times and pledge instructions.

“The purpose of this hike is to inform participants of the breathtaking length of geological time necessary for evolution to take place,” he said. “The trail changes your world view. It changes the way you look at other life forms when you identify with our evolutionary cousins.”

At a gingerly pace of approximately three to four kilometres per hour the hike will take about three to four hours. There will be rest and refreshments stops and checkpoints where participants can get their passports stamped while discussing specific issues on evolution and species in distress.

Saldanha says the notion of a common ancestry, that humans came from other beings and not just apes, isn’t something taught in most schools.

“You know it at the back of your mind but it doesn’t hit you until you realize that a fish is your cousin, a coral is your cousin,” he said. “You’ve got the same DNA in your cells that those organisms have in their cells. The genetics, the DNA sequencing, proves that we have common DNA and genes.”

The biggest challenge during the hikes, says Saldanha — who, when he’s not pondering evolution, works as a veterinarian — is helping participants comprehend the scale of time.

“The concept of geological time is so difficult to grasp, not just for kids but for adults,” he said. “That’s why the reluctance to believe in evolution. If you don’t understand geologic time, then it’s really difficult to understand evolution.”

Saldanha says science offers the best explanation for the way in which humans fit into the world. “We’re destroying that web of life that we’re intricately connected to. As those connections are breaking down, we’re putting humanity at risk.”