Multicellular progenitors of all animal life consisted of Mesomycetozoea:

Sponges are the simplest animals. They are classified as animals because they are multicellular, heterotrophic, and lack cell walls. They lack true tissues and organs, and have internal skeletons of spongin and/ or spicules of calcium carbonate or silica. Sponges have no body symmetry. The shapes of the bodies of sponges are adapted for maximal efficiency of water flow. Water enters through the central cavity, deposits nutrients, and leaves through a hole called the osculum. All sponges aresessile aquatic animals. Although there are freshwater species, the great majority are marine (salt water) species, ranging from tidal zones to depths exceeding 8,800 m (5.5 mi).

The Placozoa are a basal form of invertebrate. They are the simplest in structure of all non-parasitic multicellular animals (Metazoa). They are generally classified as a single species, Trichoplax adhaerens, although there is enough genetic diversity that it is likely that there are multiple, morphologically similar species. Although they were first discovered in 1883, a common name does not yet exist for the taxon; the scientific name literally means "flat animals".

The Acoelomorpha are a disputed phylum of animals with planula-like features that were considered to belong to the phylumPlatyhelminthes. In 2004 molecular studies demonstrated that they are a separate phylum,[1] although their position in the tree of life is contentious; most researchers believe them to be basal among the Bilateria, slightly more derived than the cnidaria. Recent (2011) results suggest that they (along with Xenoturbella) may lie near the base of the deuterostomes.[2][3]

Earlier (2007) work dismissed the phylum as paraphyletic, with Acoela and Nemertodermatida as separate clades.[4]

An ongoing (Feb. 2011) collaborative research project has "the researchers ... confident that they can reach an agreement about where acoels fit in evolutionary history.[2]

Acoels are almost entirely marine, living between grains of sediment, swimming as plankton, or crawling on algae. Acoels have a statocyst, which presumably helps them orient to gravity. Their soft bodies make them difficult to classify.[5]

Protostomia (from Greek meaning "mouth first") are a clade of animals. Together with the deuterostomes and a few smaller phyla, they make up the Bilateria, mostly comprising animals with bilateral symmetry and three germ layers. The major distinctions between deuterostomes and protostomes are found in embryonic development. 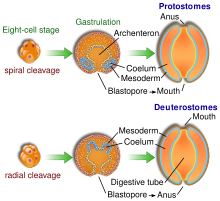 In animals at least as complex as earthworms, the embryo forms a dent on one side, the blastopore, which deepens to become the archenteron, the first phase in the growth of the gut. In deuterostomes, the original dent becomes the anus while the gut eventually tunnels through to make another opening, which forms the mouth. The protostomes were so named because it used to be thought that in their embryos the dent formed the mouth while the anus was formed later, at the opening made by the other end of the gut. More recent research, however, shows that in protostomes the edges of the dent close up in the middle, leaving openings at the ends which become the mouth and anus.[1][clarification needed] However, this idea has been challenged, because the Acoelomorpha, a group which forms a sister group to the rest of the bilaterian animals, have a single mouth which leads into a blind gut (with no anus). The genes employed in the embryonic construction of this mouth are the same as those expressed around the protostome mouth, [2]

Lampreys (sometimes also called lamprey eels) are a family of jawless fish, whose adults are characterized by a toothed, funnel-like sucking mouth. Translated from a mixture of Latin and Greek, lamprey means stone lickers (lambere: to lick, and petra: stone). While lampreys are well known for those species which bore into the flesh of other fish to suck their blood, most species of lamprey are not parasitic and never feed on other fish.[2] In zoology, lampreys are sometimes not considered to be true fish because of their distinctive morphology and physiology. The lampreys are the basal group of Vertebrata (hagfishes are actually not vertebrates, but craniates).

Sharks are a group of fishes characterized by a cartilaginous skeleton, five to seven gill slits on the sides of the head, and pectoral fins that are not fused to the head. Modern sharks are classified within the clade Selachimorpha(or Selachii), and are the sister group to the rays. However, the term "shark" has also been used for extinctmembers of the suborder Elasmobranchii outside the Selachimorpha, such as Cladoselache and Xenacanthus. Under this broader definition, the earliest known sharks date from more than 420 million years ago.[1]

Since that time, sharks have diversified into over 400 species. They range in size from the small dwarf lanternshark(Etmopterus perryi), a deep sea species of only 17 centimetres (6.7 in) in length, to the whale shark (Rhincodon typus), the largest fish in the world, which reaches approximately 12 metres (39 ft). Despite its size, the whale shark feeds only on plankton, squid, and small fish by filter feeding. Sharks are found in all seas and are common down to depths of 2,000 metres (6,600 ft). They generally do not live in freshwater although there are a few known exceptions, such as the bull shark and the river shark that can survive in both seawater and freshwater.[2] They breathe through five to seven gill slits. Sharks have a covering of dermal denticles that protects their skin from damage and parasites in addition to improving their fluid dynamics. They also have several sets of replaceable teeth.[3]

Well-known species such as the great white shark, tiger shark, blue shark, mako shark, and the hammerhead sharkare apex predators—organisms at the top of their underwater food chain. Their predatory skill fascinates and frightens humans, even though their survival is threatened by human-related activities.

In terms of numbers, actinopterygians are the dominant class of vertebrates, comprising nearly 96% of the 25,000 species of fish (Davis, Brian 2010). They are ubiquitous throughout fresh water and marine environments from the deep sea to the highest mountain streams. Extant species can range in size from Paedocypris, at 8 millimetres (0.31 in), to the massiveOcean Sunfish, at 2,300 kilograms (5,100 lb), and the long-bodied Oarfish, to at least 11 metres (36 ft).

Coelacanths belong to the subclass Actinistia, a group of lobed-finned fish that are related to lungfish and certain extinct Devonian fish such as osteolepiforms, porolepiforms, rhizodonts, and Panderichthys.[1] Coelacanths were thought to have gone extinct in the Late Cretaceous, but were rediscovered in 1938 off the coast of South Africa.[2]Latimeria chalumnae and the Latimeria menadoensis are the only two living coelacanth species, which are found along the coastlines of the Indian Ocean and Indonesia.[3][4] The coelacanth has been nicknamed a “living fossil”, because it originally was known only through fossils, long before the first discovery of a live specimen.[1] The coelacanth is thought to have evolved into roughly its current form approximately 400 million years ago.[5]

Today, lungfish live only in Africa, South America and Australia. While vicariance would suggest this represents an ancient distribution limited to the Mesozoic supercontinent Gondwana, the fossil record suggests advanced lungfish had a widespread freshwater distribution and the current distribution of modern lungfish species reflects extinction of many lineages following the breakup of Pangaea, Gondwana and Laurasia.

Amphibians, members of the class Amphibia, whose living forms include frogs, toads, salamanders, newtsand caecilians, are ectothermic tetrapod vertebrates whose non-amniote eggs are not surrounded by membranes. Most amphibians lay their eggs in water, with their larvae underging metamorphosis from a juvenile form with gills to an adult air-breathing form with lungs. Some, however, like the Common Coquí frog develop directly into the adult form, while others like Mudpuppies and olms are paedomorphs that retain the juvenile gilled water-breathing form throughout life. Adult amphibians also use their skin for respiration, with some small terrestrial salamanders even lacking lungs.

The earliest amphibians evolved in the Devonian Period from sarcopterygian fish with lungs and bony-limbed fins,[1] features that were helpful in adapting to dry land. They diversified and became dominant during theCarboniferous and Permian periods,[2] but were later displaced by reptiles and other vertebrates. Over time, amphibians shrank in size and decreased in diversity, leaving only the modern subclass Lissamphibia.

The three modern orders of amphibians are the Anura (frogs and toads), Caudata (salamanders and newts) and Gymnophiona (caecilians, limbless amphibians that resemble large earthworms with jaws). The total number of known amphibian species is approximately 7,000.[3] They are superficially similar to reptiles, but reptiles, along with mammals and birds, are amniotes, having impervious membranes that surround the egg. With their often complex reproductive needs and permeable skins, amphibians are often ecological indicators,[4] and in recent decades there has been a dramatic decline in amphibian populations of many species around the globe. The smallest vertebrate in the world is the New Guinea frog, Paedophryne amauensis.[5] The largest amphibian is the Chinese Giant Salamander, Andrias davidianus.[6] The study of amphibians is called batrachology while the study of both reptiles and amphibians is called herpetology.

The concestor of all reptiles (including turtles, lizards, snakes and dinosaurs) and the precursor of birds evolve.

The cladogram presented here illustrates the "family tree" of sauropsids, and follows a simplified version of the relationships found by Laurin and Gauthier (1996), presented as part of the Tree of Life Web Project.[10]

The Jurassic-Triassic extinction allowed the dinosaurs to flourish and become the dominant species occupying almost every ecological niche on earth.

Triassic–Jurassic extinction event (End Triassic): 205 Ma at the Triassic-Jurassic transition. About 23% of all families and 48% of all genera (20% of marine families and 55% of marine genera) went extinct.[6] Most non-dinosaurian archosaurs, most therapsids, and most of the large amphibians were eliminated, leaving dinosaurs with little terrestrial competition. Non-dinosaurian archosaurs continued to dominate aquatic environments, while non-archosaurian diapsidscontinued to dominate marine environments. The Temnospondyl lineage of large amphibians also survived until the Cretaceous in Australia (e.g., Koolasuchus).

This rest stop is the last opportunity to use the washrooms.

Monotremes (from the Greek μονός monos "single" + τρῆμα trema "hole", referring to the cloaca) are mammals that lay eggs (Prototheria) instead of giving birth to live young like marsupials (Metatheria) and placental mammals (Eutheria). The only surviving examples of monotremes are all indigenous to Australia and New Guinea, although there is evidence that they were once more widespread. Among living mammals they include the platypus and four species of echidnas (or spiny anteaters); there is debate regarding monotreme taxonomy (see below).

Triassic–Jurassic extinction event (End Triassic): 205 Ma at the Triassic-Jurassic transition. About 23% of all families and 48% of all genera (20% of marine families and 55% of marine genera) went extinct.[6] Most non-dinosaurian archosaurs, most therapsids, and most of the large amphibians were eliminated, leaving dinosaurs with little terrestrial competition. Non-dinosaurian archosaurs continued to dominate aquatic environments, while non-archosaurian diapsidscontinued to dominate marine environments. The Temnospondyl lineage of large amphibians also survived until the Cretaceous in Australia (e.g., Koolasuchus).

Marsupials are an infraclass of mammals living primarily in the Southern Hemisphere; a distinctive characteristic, common to most species, is that the young are carried in a pouch. Well-known marsupials include kangaroos, koalas,possums, opossums, wombats and the Tasmanian devil. Marsupials represent the clade originating with the last common ancestor of extant metatherians. Like other mammals in the Metatheria, they are characterized by giving birth to relatively undeveloped young, often residing in a pouch with the parent for a certain time after birth. Close to 70% of the 334 extantspecies occur in Australia, New Guinea, and nearby islands, with the remaining 100 found in the Americas, primarily inSouth America, but with thirteen in Central America, and one in North America, north of Mexico.

Laurasiatheria is a large group of placental mammals believed to have originated on the northern supercontinent ofLaurasia. It includes shrews, hedgehogs, pangolins, bats, whales, most hoofed mammals, and carnivorans, among others.

Get prepared to hike!